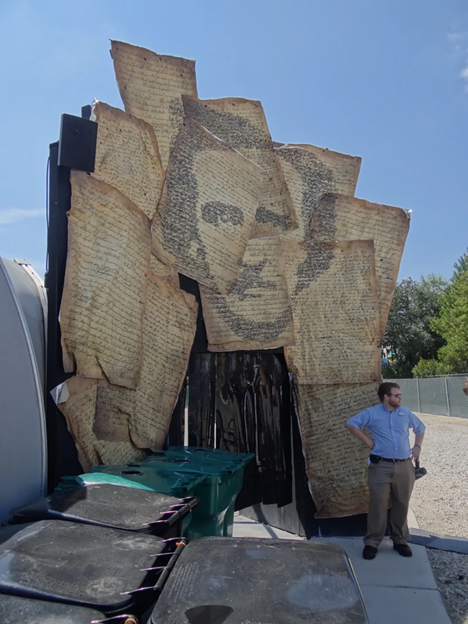 In 2011, Universal Studios in Florida decided to erect a haunted house entertainment. Thrill seekers were required to go behind the “Men in Black” bathrooms and past a line of recycling bins to reach the entrance to “Nevermore: The Madness of Edgar Allan Poe,” with its façade constructed out of giant sheets of scrawled-over paper from which an image of Poe’s visage emerges.

Come to think of it, those bins might be for garbage. Either way, literature seems to have come down in the world.

But you could look at it differently. You could see this façade, and indeed the Poe-themed haunted house itself, as an homage of sorts to literature. Whoever constructed this amusement knew something about Poe’s work, after all. The visitor wends way through a series of rooms, each staging an encounter with one of Poe’s works—“The Tell-Tale Heart,” “The Raven,” “The Black Cat,” “The Masque of the Red Death,” and so on. There are important figures from the biography as well, notably Virginia Poe, the child bride.

“The madness of Edgar Allen [sic] Poe’s works has come to life,” runs the pitch. “ Step into the mind of the iconic writer, where every turn of the page brings you closer to insanity.” “Come to life,” just to be clear, means attack the visitor: “Guests then enter a scene from “The Raven,” where giant ravens attack from multiple places in the room…. Following is a scene from “The Pit and the Pendulum,” where the main character is seen on a table getting sliced in half by the pendulum as the Spanish Inquisitors attack the guests, holding severed body parts of victims…. In the next scene, guests enter Poe’s portrait gallery, and see Poe calling out to his late wife Virginia Eliza Clemm Poe, as she and multiple other women from Poe’s life attack guests throughout the room…”

Haunted house entertainments go back a long way.  If confronting “guests” in a confined space with realistic depictions of severed body parts is the criterion, then we could go back to Madame Tussaud’s wax-figure “Chamber of Horrors” in the early nineteenth century. In the United States, the haunted house assumed its modern form during the 1930’s as a way to keep teenagers from vandalizing things on Halloween. Disney installed his “Haunted Mansion” at Disneyland in 1969, effectively inaugurating the “haunted attraction industry.”

The haunted house has been a literary device for a long time, of course, so one could argue that the modern “haunted attraction” is always a kind of homage to literature. The creators of “Nevermore: The Madness of Edgar Allan Poe” make this point explicit by equating walking through the house with reading: “Step into the mind of the iconic writer, where every turn of the page brings you closer to insanity.”

The metaphor of the mind as a house is one Poe embraced, most insistently in “The Fall of the House of Usher,” where the house with its “vacant eye-like windows” and its two lonely inhabitants constitute a single organic entity. Poe goes further and embeds his poem “The Haunted Palace,”which works the same equation of mind and building, in the story—a kind of doubling down through allegorical redundancy. In other words, Poe has already imagined something quite like this attraction, right down to its self-conscious artificiality. Even the forced march through themed rooms, each more grisly than the last, recalls “The Masque of the Red Death” and its color-coded itinerary of horror.

There is a reason, in other words, why this attraction is called “Nevermore: The Madness of Edgar Allan Poe” and not “Otranto, Castle of Fear” or “Thornfield Hall: Madness in the Attic.” (Although one can, apparently, tour the inspiration for Bertha Mason’s attic room in Yorkshire). Unlike Walpole or Brontë, Poe stands for Literature, or perhaps better, for the idea of Literature most congenial to a world of “attractions.” The reasons for this are many and various, some of which I will be discussing in this introduction and throughout the book. Although Poe, his work, and later ideas about his work are constant touchstones in this book, it is not finally about any of those things. In this book, I examine many of the ways in which artists in media other than literature take up Poe for their own purposes. It is what makes that uptake possible or desirable that finally interests me, the aesthetic concepts or values that translate across media.

Consider again the haunted house at Universal Studios. What one ultimately seeks in going into this structure, or any other like it, are the experiences of dread and fright. The dread is immanent in the setting: it is dark, it is claustrophobic, you know something is coming but you don’t know what—in short an experience of immersion and relative powerlessness. The fright comes when what one has been dreading appears: the dynamic here is from obscurity to vividness, even extremity—an experience in which we suddenly lurch from blind to blinded, as if the eruption of the visible in all its terrifying explicitness were a flash going off, leaving us only with our painful retinal after images.